That was the week that was…

I’ve had a lovely few days. I’ve played some fantastic gigs, got to wear pretend glasses on Channel 5 AND discovered a new type of cereal fronted by the Honey Monster. I can’t remember a more thrilling week since that time back in 1992 where I met John Leslie at the Royal Tournament whilst abseiling in my Girls Brigade uniform.**

My recent gigs have ranged from a smart corporate one where the audience were called thing like Socrates (seriously), one in trendy East London where heckles of ‘Where’s Paul Daniels?’ were as strange as their choice of satirical footwear, and then there was a swanky one in a private members club where I got very drunk and shouted loudly into the ear of someone who looked like Jon Culshaw, ‘You look like Jon Culshaw’, only to find out that it was Jon Culshaw.

Then I was on Big Brother’s Bit on the Side on Channel 5 which was dead swanksville because I got a lift there in a Prius and then got to hang out in a ‘green room’. Green rooms are ace ‘cos they are filled with free stuff you are allowed to have loads of. This one for instance, had Twiglets, Diet Coke and Vanessa Feltz’s boyfriend. I don’t think Vanessa Feltz’s boyfriend is a permanent fixture but the snacks and Coke are. Actually, I may start demanding Vanessa Feltz’s boyfriend to be a staple on my green room demands list, like what Mariah Carey does with pink kittens. 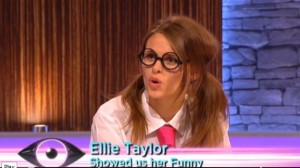 Me on BBBOTS adhering to the 'school' theme. Freckles were added by my own fair hand using a biro (which may have belonged to Vanessa Feltz's boyfriend)

After the excitement of the free Twiglets I thought it was only fair that I go and visit my parents in Essex to make sure I stay grounded. I did this by watching Downton Abbey and eating some phenomenal apple crumble whilst Mum told me not to get crumbs on the sofa and dad fell asleep in the ubiquitous ‘Dad chair’ which is basically my idea of contentment.

I also played with my little nephew who has just started doing animal noises. It’s literally the best thing he’s done aside from being born. My favourite is either ‘oink oink’ for a pig (he really commits to this one) or ‘raaar’ for a lion (which he does in an eerily quiet manner- very advanced). He also does one for ‘zebra’ but I think that’s just his parents taking the piss.

**true story and a contender for the name of my autobiography.