On Wednesday, for the first time in my whole 22 years of life (why are you laughing?) I wangled my way into the BBC Centre in London. It was just how I’d imagined it would be, although I was sad not to see any of those hippos swimming in a circle. Maybe they were rehearsing for Strictly.

Because the Beeb hire out their studios, I wasn’t actually filming anything for Auntie but instead the Channel 4 show ‘8 out of 10 Cats’. It’s safe to say it was *quite* an exciting day for me. In fact, if you re-watch Wednesday’s ‘The One Show’ on iPlayer and listen very carefully at about three minutes 43 seconds in, you’ll clearly hear when I arrive in the building as there is a faint squeal followed by,

‘OH MY GODDDDD! THIS DRESSING ROOM’S MASSIVE! ARE THOSE PACKETS OF JELLYBEANS FOR ME? ALL FIVE OF THEM? AND THE COAT HANGER IS MINE TOO? BUT IT’S NOT EVEN A WIRE ONE!’ 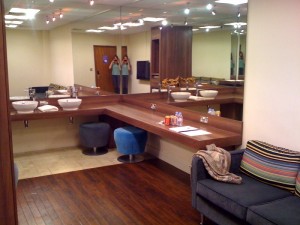 My dressing room. As you can see, it was big and had interesting cushions on the sofa. Sadly the coat hanger is out of shot .

My room was next door to one of the other guest panellists who was the lovely Irish comic David O’Doherty. I am a big fan of his because I saw a show of his in Edinburgh where he made some delightful observations about penguins whilst sporting a cracking beard. So I told him these thoughts, and then in the interest of fairness he let me see his dressing room. He had a table and chairs which I didn’t have, but I didn’t mind. He still had the beard so I figured he deserved something extra. Plus, I was still riding high on the wooden coat hanger euphoria.

And then after a quick dab of make-up and hair faffing I was walking into studio six with Jimmy Carr, Jon Richardson, Sean Locke, Craig Revel Horwood and Rick Edwards in front of a massive audience most of whom were disappointed that I wasn’t Sarah Millican. And before I knew it, the jokes had been told, the goading of Revel Horwood had been done and it was all over.

Once stripped of microphone I went straight to the green room for some swift wine and roasted cashew quaffage to debrief with Team Taylor. The consensus was that my eye make-up didn’t look ‘too’ tranny and that all in all, it had been a great show. How much of that was down to Craig Revel Horwood wearing the tiniest bowtie in the world remains to be seen.

So in summary watch Friday 7 October, Channel 4 at 1030pm. Or on 4od if you are reading this in the future. Or if you can’t be arsed, just accept my word for it that I was terribly pilthy and humorous.

Ps- before you ask- no I didn’t nick the coat hanger… because I was far too busy consolidating my efforts of clearing out the mini-fridge. My balcony pots of lemon thyme are rejoicing in their daily Evian dousing.