Getting a lot of Flack

Well everyone’s having a right go at Caroline Flack, aren’t they? All cos she’s 32 and doing rudies with 17 year-old Harry from One Direction. Assuming of course, that they really are doing rudies and Harry didn’t just stay at her house so she could sign the consent forms for his paint-balling weekend with JLS.

But let’s go with what the cynical press are saying, that she is in fact, tapping someone so young that he will have no recollection of when Ant & Dec were rapstars or what it was like to use a landline.

People are saying ‘She’s a ruthless predator, praying on an innocent young boy-band member. Imagine if Dermot O’Leary was having pajama parties with Cher Lloyd. We wouldn’t be so accepting then would we?’ And I would say to that:

1. There is no such thing as an ‘innocent boy-band member’. We all made that mistake with Mark Owen. Never again.
2. As if Cher Lloyd wears pyjamas. She sleeps in a light gauze made entirely of dry shampoo and mascara.

I wonder  if all the tutting about this fling has anything to do with the fact that Caroline Flack is undeniably hot, and the usual stories where one party is older than the other, tend to involve reasonably unattractive old blokes with a pretty young girls. For example:

1. Jay-Z and Beyonce
2. Charles and Diana
3. Hugh Hefner and anyone he’s ever dated

Yeh. Evidence both exhaustive and damning.

In my opinion this blossoming relationship between Cazza and Hazza may be a little unconventional, but in the grand scheme of X Factor related weirdness, there have been far weirder stories. It’s no worse than ‘MP and a Cheeky Girl’ for instance, or ‘Sinitta’.

I reckon that so long as both parties in this controversial liaison are happy, consenting and not being taken advantage of, then let them carry on with their late night Xbox and soggy biscuit sessions. It’s nothing on the 85 year-old Duchess Alba (below) who recently married her lover, 25 years her junior. 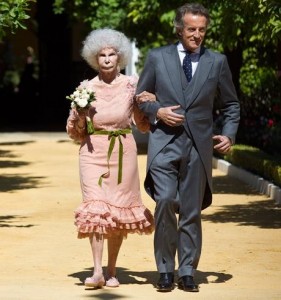 Some people say the Duchess’ fella only married her for the money but I would say, ‘Look how voluminous her hair is! He simply loves an older lady!’. After all, I hear Harry really digs Caroline for her dip-dye locks. That and the cheap over 30’s car insurance she can get.