What a summer! I survived my first ever Edinburgh comedy festival which is no mean feat considering it’s normal up there to say things like ‘This is my fifteenth gig of the day, only two more to go’ and ‘I had an early one last night, was home by 4’.

The festival was brilliant and uplifting but also awful and bone crushingly horrific all at the same time. Very similar to the act of child rearing, I imagine. Just when you think you’ve successfully placated a tantrum in Tesco, the little brat takes its trousers off and shits in the biscuit aisle.

So after a month of no sleep and audiences as fickle as a Natasha Giggs in a room full of men with the surname Giggs, it was only right that I took some time out in the form of a holiday.

So did I jet to Barbados for sun, rum and a passionate but fleeting affair with Michael Winner? Hell no – not after last time.

Maybe Marbella then, to hang out with some of my kinfolk posing on the Essex Riviera? No way – there’s no way I’m wearing a bikini with that fox Nanny Pat around.

No, in fact , I went to a holiday home three miles west of Norwich accompanied by my parents, my sister, my brother in law and my nephlettes. (NB: ‘nephlettes’ is a word I have created to refer to a mixed group of nieces and nephews. I’m pretty pleased with it.)

And the glamour doesn’t stop at the ‘Norwich’ name drop my friends, oh no. Due to the fact that there were seven humans and two bedrooms, the sleeping options were somewhat limited. But as my family love me dearly, they kindly managed to rustle me up a spot. I was informed by my darling sister ‘The baby’s in the living room so the sofa bed’s out of bounds. You’re on the floor in the hall.’

THE HALL. The picture below shows my plush dwellings. 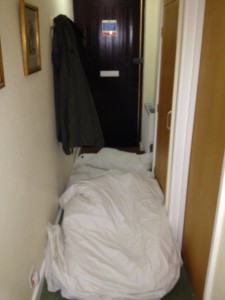 Now I don’t mean to come across like a diva, but even Anne Frank had access to an actual bed. All I had was access to the post when it landed on my face. And on that point, IT’S A HOLIDAY HOME, THERE SHOULDN’T BE ANY POST.

I never did decide what was the best bit of bedding down there; was it sleeping underneath a curtain of coats or maybe the exciting threat of giving myself concussion on the radiator during every nocturnal duvet readjustment? Gosh it’s just like a holiday version of Sophie’s Choice.

But all in all, I had a wonderful time with my family. The memories of the holiday will live long in my heart. Maybe even longer than it takes for the scabs from my ‘Welcome’ mat inflicted facial carpet burns to heal.