If I had a pound for every time someone’s said “Hurry up and write a blog describing your experience when you recently flew in First Class!”, I’d literally have no pounds. But I would have an Anya Hindmarch toiletry bag that I stole from First Class. Did I mention I flew First Class?

But I’m still one of you though guys! Sure, my toiletry bag is superior to yours, but I’m still normal. What I’m trying to say, is that in my previous life when I had a grown up job and a vague chance of ever getting a mortgage, I flew to places for work and amassed a large amount of air miles. And much like money and bowling shoes, you cannot take air miles with you. So when I had to book a flight to visit absent boyfriend in Russia, I decided to splurge.

I splurged on the face of Economy Class and it’s plastic cutlery. I splurged in the eye of the nominally increased legroom of Premium Economy. And best of all, I splurged long and hard all over the flat bed of Business Class, because when I splurge, I. Do. It. Right.

(…And also because there were no other air mile flights available so I basically had no option. If I’m honest, the splurging was non-consensual.)

So here is the story of how I was made to feel like a movie star. (By that I mean ‘special’, not under sudden pressure to lose two stone and marry Tom Cruise.) I’ll do it in bullet points because lets be honest, the splurging paragraph was painfully laboured:

* I arrived at Heathrow and approached the ‘First’ check-in section so I stopped to take this photo. The man on the right of the photo is telling me to stop taking photos. 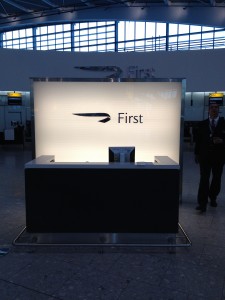 * After playing it cool at the check-in desk by saying “ARE THOSE REAL FLOWERS?” (they were), I was fast tracked through security. Never has the bit where the lady in the uniform sweeps her hands along your underwire been more thrilling.

*I then went into the Concorde Lounge for some breakfast. It’s like Giraffe, but for people who matter. Below is my table, complete with a rosemary plant. Special people like fresh herbs with their Special K. 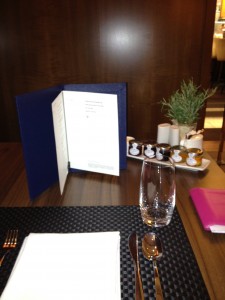 *After spending lots of time putting things in my bag (magazines, biscuits, waiters), it was time to board my plane, where I was greeted by name and asked to turn LEFT. ‘LEFT’ MOTHER HUMPERS!!! And below was my cabin. MY cabin. All to myself. ‘Cos no other bastard was as important as me /stupid enough to waste all their air miles on a four hour flight. 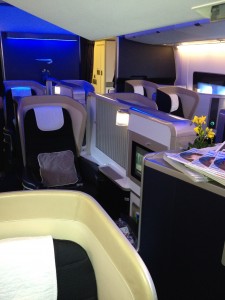 *I settled into my seat and ingratiated myself seamlessly into the First Class experience by asking the stewards insightful questions like “ARE THOSE REAL FLOWERS?” (they were) and taking photos like this.

*This is my area, by which I mean my seat and not my vagina. Those are my FREE slippers (I smell them sometimes). 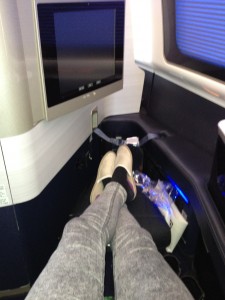 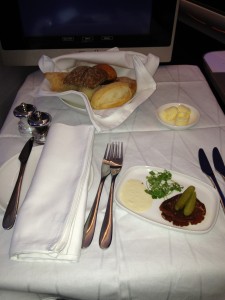 *After this I was too drunk to take more pictures, so I fell asleep. On my bed. A bed. IN THE SKY. And when I woke up, the air steward had covered me with a FEATHER DUVET. It was like being cuddled by a cloud.

*And then we landed in Moscow and I queued for an hour at immigration because I wasn’t special anymore. Sometimes I wonder what will run out first, the special memories of that special day or the shit load of biscuits I nicked.