Much to my disgust, I am back from my wonderful month long holiday to Australia. I am gutted. Don’t get me wrong, the UK has some things going for it, like pork pies and Stephen Fry, but I would chop both of those in a heartbeat if it meant we could get our hands on some shark infested waters and a claim to inventing pavlova.

Australia is just wonderful. If you haven’t been, DON’T. Save yourself the heartache you experience on return. Especially if you’re Northern. I’m finding the transition hard enough and I’m from the nice bit of the UK, but YOU guys would be searching for the painkillers and whisky before you’d passed the first sign post to Birmingham.

The reason I was Down Under over Christmas was due to the fact that I have chosen an Australian life partner. So incidentally, has my sister. It seems my mother severely underestimated the effect long term exposure to Neighbours and Craig McClachlan can have on impressionable young girls.

So Sydney was my adopted home for a few blissful weeks where I spent much time observing the natives. Here are some insider Antipodean facts for you:

1)    Australian people don’t see shoes as mandatory, particularly on children. Everywhere you turn there are shoeless kids running around like human veruccas. I even saw GROWN UPS wander round shopping malls sans footwear. Imagine that. The only adult in the UK you see without shoes is Diana Vickers off of the 1987 Xfactor and she only does it because she’s totes a free spirit. These Aussie shoeless souls were definitely NOT free spirits because they were usually drinking slurpees from 7 Eleven.

2)    While shoes aren’t de rigueur in Aus, they do have some other stringent sartorial rules which unfortunately, I learnt the hard way. Imagine my despair when I turned up to a bar in my favourite muscle shirt at 6:03pm and saw the below sign. Until that moment, I didn’t know it was possible for deltoids to do a sad face. 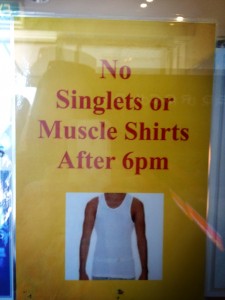 3)    Australia uses jigsaws to lie to their children about animal behaviour. From my experiences gained by watching ‘The Really Wild Show’ I’m almost certain no cat has hatched out of an egg and then embraced two things that are very much below it in the food chain. He may as well have his arms around two zinger burgers.

4)    As you can see below, Aussies like to put sheep placenta on their faces. Placenta. Of a sheep. Needless to say I didn’t buy any. If I wanted to slather my face with something weird and slimey that another mammal has excreted from their body, I’d just motor boat Dr Christian from Embarrassing Bodies. 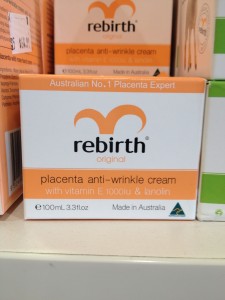 5)    Sydneysiders like you to admire their bridge, which I think is weird. Essentially, a bridge is just a road on stilts. Sure roads are great; I wouldn’t be where I am without them, but I’ve never been on the M25 and thought to myself ‘That flyover would look ace on Instragram’. But you gota do what you gota do, so below is the obligatory selfy. (I’ve got a picture in front of an brilliant roundabout but I want to stagger releasing such gold into the world.) 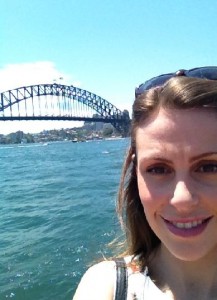 I have loads more of these mind boggling facts but writing about Australia just makes me miss it even more. There’s only one thing for it – I’m going to watch Bondi Rescue, stroke my muscle shirt and find the afterbirth of a sheep. Bonza.