A guide to becoming an #internetsensation

Last week I posted a silly collage containing five silly photos of me being silly. The reasons behind my actions were extremely politically nuanced aka I was meant to be writing a new hour of stand-up so was avoiding doing work by fannying.

The photos were me doing an alternative to the ‘motherhood challenge’ pics I’d seen come up on my Facebook feed over the previous few days. So, instead of five pics of a darling child looking darling with avocado shit smeared all over it’s darling face, I did the ‘non-motherhood challenge’ which was five pics of me asleep with a bottle of wine. LOL. I know. Whatagal. Look, here it is. 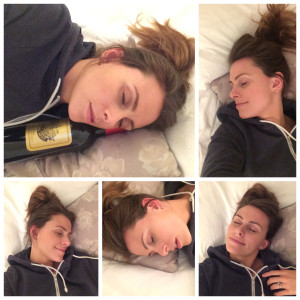 And then it got weird – I whacked it on Facebook and within 24 hours it’d been liked by over 100k people aka I had become an #internetsensation.

Here is my guide to anyone else who finds themselves in the same situation:

YOU WILL REFRESH YOUR FACEBOOK PAGE A LOT
You will be excited and tell your husband how many more likes the post has got since you last told him and he will say ‘Bollocks!’ because some people are jealous of #internetsensations.

WEBSITES WILL MENTION YOUR AGE A LOT ESPECIALLY THE MAILONLINE
You will begin to think that ‘Ellie Taylor 32’ has nice double-barrelled ring to it. You think it’s to remind people that your ovaries are flaking apart by the very second like the magic rose in ‘Beauty and the Beast’. You’ll also be on an article on the BBC news site and be quoted as using the word ‘arse’ and your mother will be unhappy.

YOU WILL GET TV INTERVIEW REQUESTS FROM BRAZIL
You’ll also become a hot topic on Indian parenting blogs and as for Italian satirical sites – mate, they cannot get enough. You’ll even be on the French Huffington Post, which is called ‘Le Huff Post’ which you will find very funny. Which brings me onto the next inevitability….

YOU WILL BE INSULTED IN FOREGN LANGUAGES
Your favourite one will be a comment which Google translates as ‘It has dark circles under it’s eyes’ because even #internetsensations need to up their concealer game.

SOME PEOPLE THINK YOU ARE TRYING TO TRICK THEM AND THEY HATE YOU
People will look at the obviously fake silly photos you have taken of yourself pretending to be asleep and say things like ‘Staged pics, don’ t be crying when your biological clock runs out,’ because 1) they were dropped on their head as a baby and 2) they think  biological clocks are like sand timers  in ‘The Crystal Maze’.

MEN WILL SEND YOU EXPLICIT PICTURES
Some dreamboats will talk about how much they want to bum you accompanied by a photo of their erect penis next to a remote control (for what you assume, is a handy guide to scale). The remote control will be a generic make which is shame because every one knows ladies only let men who can afford real Sky controllers bum them. Other men will send you pictures of your head superimposed onto another woman’s body who is having sex. This is great to help you see what you’d look like with a nipple piercing and a tattoo of, what you think, is a wolf.

YOU WILL APPEAR ON THE ELLEN SHOW
This has yet to happen but I assume it’s the next logical step.

I think that’s the main points. Any questions call my PA.