Last night I came across the Kim Kardashian Instagram post from earlier in the week. It was KimK and Emily Ratajkowski (her of Blurred Lines video controversy fame) posing topless in a bathroom with black boxes hiding their nips, both flicking the bird. Emily posted the photo  (I feel like I can call her Emily since I’m discussing her rack) with the caption:

“We are more than just our bodies, but that doesn’t mean we have to be shamed for our sexuality #liberated” 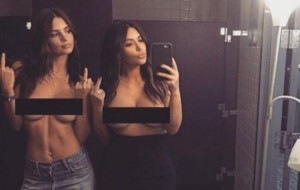 And a whole load of thoughts started bubbling up in my brain. I’m not proud of them, but hey, I’m nuts so here goes:

Oh my God look how fierce they look. Look how skinny they are but with massive knockers. Talk about winning the genetic lottery. I wonder what I’d look like doing that pose.
*Goes to the bathroom, takes top off, emulates pose*
Oh. I don’t look like them. God I hate my stupid tits. And I really need to get skinnier.
Wouldn’t it be amazing to be that thin just once. Well, no Chinese takeaway for me tonight. I bet Emily and Kim don’t eat takeaways, unless it’s from a place specialising in kale and dust sushi. In fact, screw a relaxing Saturday night, I’m going to the gym right now.
…Before I go to the gym though I’m going to send the picture to my girlfriends on our WhatsApp group just so they can all see how thin Kim K and Emily are.
Oh look – all my friends think they are incredible and wish they looked liked them too. Cool.

And then I started to think – what the actual FUCK.

Why, is two A-list celebrities taking their tops off #liberated? I know one thing for sure – it doesn’t make me feel #liberated. It makes me feel #totalcrapbags. And I’m a 32 year old woman from a supportive family with an ace husband and a nice career. Technically I have my shit together. Plus my job is engrained enough in the silly show-off world that I understand that it’s all nonsense and marketing and bronzer. And yet that picture actively makes me feel less. So if I feel that, what the f*** do less secure women or teenage girls feel when they see that picture?

So then I started thinking, what were Emily and KimK trying to prove in this picture? That they are empowered for taking their tops off? That they have had enough of being shamed for their bodies so this is them taking back control? Lord knows both of them have had a lot of flack in their time for how they look or how they’re perceived to flaunt their looks. Emily recently wrote a super interesting piece for Lena Dunham’s Lenny Letter called “Baby Woman” about growing up looking like she does. In it she says:

“I refuse to live in this world of shame and silent apologies. Life cannot be dictated by the perceptions of others, and I wish the world had made it clear to me that people’s reactions to my sexuality were not my problems, they were theirs.”

So is my reaction to her body in this picture my problem? She was born looking like that (give or take the professional hair and make up, personal trainers, stylists and maybe a bit of work). Why should she hide it? To be fair, if I looked like that, I’d probably take naked pictures all day and then  look at them and laugh joyfully to myself at how great my boobies are. And you know, I did put a picture of me on Instagram in a bikini last year. I made my friend take it at an an angle where I thought I looked best and then filtered the bejasus out of it.

What’s the difference? Why did I take that photo? The answer was, I was on holiday with mates being silly… but not silly enough to have a photo taken where you can see any fat rolls.

Was my intent any different to theirs? Showing my body off at it’s best? I guess the difference is,  I’m not a gazillionaire A-lister being viewed by a gazillion young girls, and I wasn’t suggesting I was fucking the system. They claim ‘liberation’, that their actions are in some way setting them free. But can it really be liberation if it oppresses me right back?

But then we come back to the point again of whose fault is it that I feel shamed by this picture? Why should these women I have never met be responsible for my insecurities. It has nothing to do with them. Why should they stop looking beautiful and posting selfies of their cracking cleavages because some idiot in a hotel room by herself really wants some Peking duck? I was more than fine with Amy Schumer getting her kit off for an Annie Leibowitz picture because that really did feel empowered and #liberated. But what does that say about me? That I’ll only accept women over a size 10 getting naked publicly because that doesn’t make me feel bad. Oh Ellie.

Plus, women going topless to demonstrate against female oppression isn’t exactly a new thing. Just look at Femen, the feminist activist group,  those bitches take their tops off all the time. Isn’t it just the same thing? Hmmmmm. Those groups are fighting for things. They use their  sexuality as an affront to a political system they want to change and they do it in a politicised unsexualised way. The only thing they are promoting is a fair, free society. Kim K and Emily are selling a whole lot more than that. They are selling their brands.

It feels like they’re leveraging their freakishly remarkable appearance to raise themselves up higher. Higher than they already are above the rest of us plebs. And as we view that picture and loathe ourselves and then send it to our friends so they can loathe themselves too, it sends us further and further down into that seemingly bottomless well of self loathing.

I’m still not entirely sure what to make of it all. I still think Emily’s Lenny Letter article raises some interesting points. But while I certainly don’t think she should be ‘shamed’ for her sexuality, I don’t think her sexuality should shame other women. And that’s what this picture does. I came across an article discussing the photo on an Aussie website and I think, as much as I like to sit on the nice comfy fence, the journalist, Jacqueline Lunn has nailed it:

” They are taking women, one “empowering” selfie at a time, to the very worst place inside herself.

That’s not empowerment. That’s two, very privileged, mean girls in a bathroom taking pictures of themselves and giving the world the finger.”